According to a report in the Arabic  language al-Hayat newspaper, Israel’s message was delivered to Palestinian Islamic Jihad (PIJ) through United Nations Special Envoy for the Middle East Nickolay Mladenov.

Israel has reportedly threatened Palestinian Islamic Jihad that it will assassinate the group’s leader Ziad al-Nakhla if the rocket fire continues, an Arab media report claimed on Wednesday. Al-Nakhla is said to be based in Damascus. According to a report in the Arabic language al-Hayat newspaper, Israel’s message was delivered to the Palestinian terrorist faction  by United Nations Special Envoy for the Middle East Nickolay Mladenov.Read More Related Articles

“If the PIJ continues to fire rockets at Israeli towns, Israel threatens to escalate assassinations, and that the secretary-general of the group is not safe from these threats: He is also a target,” the report quoted a source as saying.  “But if the group stops firing rockets towards the settlements of the Gaza envelope and commits to a truce, Israel will abide by all the terms of the truce understandings and will also provide more facilities to the Gaza Strip.”

The sources stressed to the paper that while Israel is not interested in escalation, PIJ will likely continue to escalate the situation over the coming hours as the efforts of Mladenov between Israel and Islamic Jihad to put an end to the violence have yet to achieve any results. Hamas, the report continued,  does not want to involve itself in the latest round.  “We believe that PIJ is on its own,” the sources told al-Hayat. 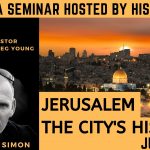 “JERUSALEM AND DISCERNING THE TIMES CONFERENCE.”

Subscribe for FREE to leave your comments on our articles!